Miracle of Miracles: A Mets No-Hitter 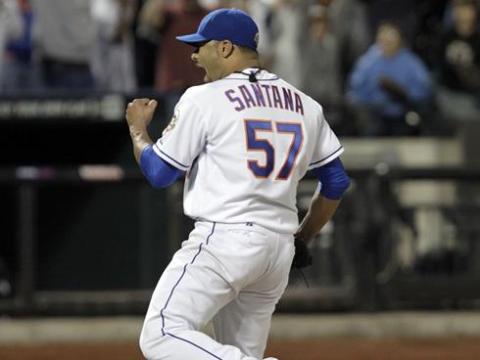 I never thought I’d be writing this: a Mets pitcher has tossed  a no-hitter. It only took 50 years, 8020 games, 10 U.S. Presidents, two Red Sox World Series, a Rangers Stanley Cup, a Saints Super Bowl, a more than doubling of the world’s population,  men on the moon, the invention of personal computing, and the entire history of the Rolling Stones,  but one of the most bizarre and perplexing statistical oddities in baseball history — someone even devoted a website to it  —  can finally be laid to rest.

All thanks to a guy with a rebuilt shoulder whose career was in question until a few months ago.  What Johan Santana accomplished tonight  in no-hitting the best offense in the National League, the St. Louis Cardinals, gives every Mets fan, especially those over the age of 30, a chance to finally exhale and say: “Okay, the joke’s over. Very funny. Now can we go on living a normal life as a baseball fan?”

From the beginning of the season, I had this sneaking suspicion — albeit an illogical one —  that this might be the year that the Streak would end. After all, it’s the Mets 50th anniversary season and wouldn’t it be nice to break the ice during this historic year? Earlier this spring, both Jon Niese and R.A. Dickey took no-hitters into the sixth — which is a big deal for the Mets. I started to feel like the tectonic plates were shifting ever so slightly. I guess they were just priming us for the real deal, courtesy of Johan.

What is so amazing about this night, aside from the fact that it seemed impossible just hours ago, is that it would come from a guy  who was on a strict pitch count (then again, aren’t they all?) as he worked his way back from surgery that shelved him all of last season. Last Saturday, when he blanked the Padres en route to a 96-pitch shutout at Citi Field, Johan showed signs of his once dominant form.  But to come back in his next start and toss a 134-pitch no-hittter? These things just don’t happen in Flushing.

When you consider that no Mets pitcher had even taken a no hitter into the ninth inning since 1975, when Tom Seaver held the Cubs hitless for 8 2/3 innings at Wrigley before surrendering  a hit to the incomparable Joe Wallis, it was very easy to believe that Johan would meet the same fate. But something truly amazing happened tonight: everything went the Mets way. A line drive in the sixth by ex-Met Carlos Beltran skimmed the chalk past third base but it was mistakenly ruled foul by ump Adrian Johnson (the anti-Jim Joyce). Now, before you cry that Johan’s gem was thereby tainted, give me a pass on this one. How else are we to savor our first no-hitter in 50 years without a little charity? Just once, okay? My guess is that the No-Hit Gods had a make-good in store after the Tigers’ Armando Gallaraga was denied his perfect game on account of Joyce’s blown call. They were holding this one in their back pockets for the Mets at just the right time, for just the right guy.

And how about Terry Collins, who swore he would not allow Johan to exceed 110 pitches, keeping his ace out there to take a shot at history? This was old school all the way. Leave your workhorse out there and let him pitch until he says he can’t go any further.  If Johan’s shoulder blows out later this season, Collins may take heat for this — judging from his post game comments, I’m sure he had mixed feelings about his decision — but I am hopeful that history will show he made the right move.

So from here on, no more writing or obssesing  about Nolan Ryan, Tom Seaver, Doc Gooden, David Cone, Mike Scott, Hideo Nomo, Philip Humber  (traded for Santana, by the way) and the inevitable next ex-Met who would somehow find no-hit magic after departing Flushing.  No more wondering how teams like the Marlins and White Sox can throw no-hitters and even perfect games in neat little clusters, when the Mets can’t even take a no-hitter past the sixth inning. No more scratching my head and asking why a team that has played its entire history in cavernous, pitcher friendly parks can’t toss a no-hitter at home, when the Red Sox, playing in that band-box of a ballpark, have been throwing hitless gems at Fenway every two years it seems, for the past decade.

And most importantly, I no longer have to wonder if this streak of no no-hitters was the most visible sign — other than years of lousy ball, countless injuries, late season collapses, bad trades, mindless free agent signings, pitiful player development, questionable financial management — that this team, despite a few very glorious moments in their half century, would always be bogged down by the DNA of their loveable but pathetic progenitors, the ’62 Mets.

With this King Kong-sized monkey off their backs, thanks to the heroic efforts of a gutsy veteran lefthander, the faith of a manager who I am liking more and more each day, a great catch in left by a guy (Mike Baxter) who grew up a few miles from Citi Field, and the kind of good fortune (luck, actually) that has been in such short supply in recent years, I’m hoping this is a portent of better things to come, a sign that the gravitational pull of Murphy’s Law was starting to ease up on this tortured franchise.